Addicted to pawn: Why designer handbags are the new gold. – Coco et Louis

Addicted to pawn: Why designer handbags are the new gold.

Addicted to pawn: Why designer handbags are the new gold

"It's a Chanel day bag - a timeless classic. If you had 50 in the shop, you'd sell all 50," says Nathan Finch, managing director of Pickwick pawnbrokers.

We are in the strongroom of his shop in north London, where he is showing off some of the hundreds of bags that customers pledge each year, in return for borrowing money.

Once it was mostly watches, gold or jewelry that people took to pawnbrokers. Now, designer handbags are the big growth area.

They are increasingly high in value - often worth thousands of pounds each, they are easily portable, and there is a seemingly limitless supply.

"For some women, it's a bit of an addiction. They get their fix from buying a bag. But like most cravings, it comes again," says Mr Finch. 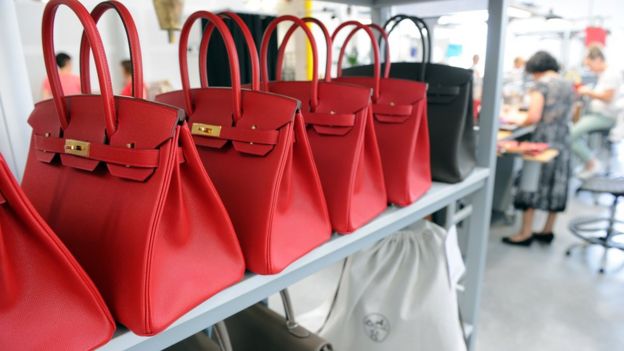 "One customer brought 18 bags into our Dartford store."

With celebrity endorsements from the likes of Cara Delevingne and Kim Kardashian, bags offer plenty of glamour.

But on a more practical level, you can use them to borrow cold, hard cash.

Yet some of those who pledge their bags are already extremely well off.

Debbie Wynter, who runs the pawnbrokers Suttons and Robertsons in central London, calls them "the ladies who lunch".

"One customer wanted to raise a loan so they could go on holiday on a private jet, in style," she says. 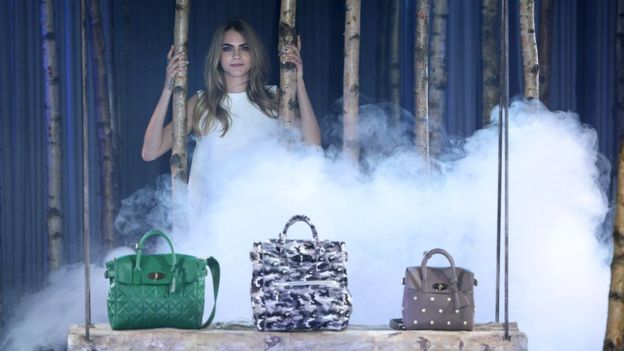 They may live in flashy houses in South Kensington, but sometimes they don't have access to ready cash.

However, often they are ordinary working women.

Kim Baker, an office administrator from Kent, has three or four designer bags, which she regularly pawns at her local shop.

Her favourites are a Mulberry Bayswater, a Louis Vuitton Postman, and a Chanel clutch bag.

"I flip between the Mulberry and the Louis Vuitton because I don't like to part with the Chanel. They probably go in every couple of months, but they're never in there for long."

On occasion, she's been tempted to pledge one bag so that she can afford to buy a different one.

"Yes, I would pawn one to buy another one. It'll just come home until I put it in again."

She typically borrows a couple of hundred pounds at a time, to pay for holidays or school uniforms. And she prefers to take a loan from a pawnbroker rather than a payday lender or friends.

"Because it's my item, it feels like I am borrowing from myself, if that makes sense."

The bags that hold their value best - and therefore are the easiest to pawn - are the classic designs by Hermes, Louis Vuitton and Chanel.

Two of the most valuable are the Birkin - named after actress Jane Birkin - or the Kelly, as carried by Grace Kelly in one of her classic films.

These are normally worth up to £6,000 each, but one exotic Birkin in pink crocodile skin is currently for sale on a French website for £167,000.

Admittedly it uses pink sapphires to fasten it, and white gold for the lock.

"There are certainly pieces that make sense at that level," says Matthew Rubinger, the head of handbags for Europe, the Middle East and Africa, at Christies in Hong Kong.

"What's really interesting is that we are just starting to see these trends, as people move up from being casual buyers to collectors."

Last year Christies sold a pink Birkin with diamonds in it for £168,000, and three months ago they sold another (pictured above) for £227,000 - a world record price.

However, Mr Rubinger advises people not to invest in exotic designer bags unless they really know what they're doing.

"I wouldn't recommend anyone to empty their savings account."


The trend to pawning designer bags is not confined to the big cities.

Larry Kohen, who runs three pawnbrokers in Cornwall, says it is becoming a regular habit amongst some of his clients.

"One week we had a Goyard in. We also had a couple of Hermes bags in as well. They're stupid money," he tells the BBC.

"Sometimes there's a sad reason. We had a lady, a second home owner, who couldn't afford the mortgage. She brought bags and jewellery into us."

Sometimes women will pawn bags they have been given, which they don't like.

The fact they are fashion items also boosts turnover.

"Sometimes we buy a design, but it gets to two years old and we don't want to wear it any more," says Myint Myint Thein, an avid bag collector who also manages the Pickwick store in north London.

"At some restaurants or clubs, when we go, we need to wear Chanel, Dior or Gucci.